The first thing I remember reacting to this morning was the quiet noises of Matthew (@ArcticCycler) getting out of his tent, then a short pause followed by a loud "WOW!". I felt, however, that I did not want to get up at 5 in the morning, so I stayed in my sleeping bag and rolled over. A little before 6, the lack of snoring coming from my tent made it apparent to Matt that I was no longer asleep. He soon urged me to get up and take in what I quickly realised was an absolutely stunning morning, complete with a rolling layer of mist on the lake. 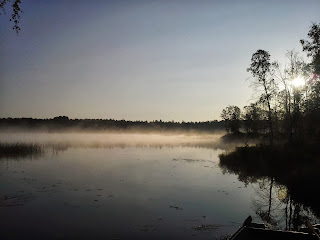 In no rush what so ever to leave, we took time to enjoy the view and eat our breakfast. After reaching the main road again we kept the pace slow, allowing our legs an equally gentle start to the day.

Nearly halfway to Tallinn we entered the town of Rapla, where we ended up having an extended lunch by the little stream running through town. We didn't let the fact that we were underneath the droning AC fans behind the mall detract from our enjoyment of this almost luxurious picnic consisting of bread, cheese, yoghurt, strawberries, cherries, juice and other goodies.

After Rapla the road slowly became busier and busier as we started to get closer to Tallinn. Having stuffed our stomachs with way too much food during lunch, our bikes were also moving slowly at this point. Still outside the outer ring road Matt noticed that we were no longer on the recommended route he had pieced together by reading cycling forums. Near the village of Tagadi we cut across to Kiisa where we found ourselves on excellent bike paths which we would follow all the way into the capital. The new route took us through Saku, past the largest brewery in Estonia, and onwards to Tallinn.

The busy urban traffic of Tallinn was exciting after the hard shoulder of the highways and quiet country lanes I'd mainly been on for the last week. We made our way to old town to pose for the obligatory "I made it!" photos and the 'necessary' twitter, facebook, (foursquare) and Google+ updates. We were both exceedingly giddy at this point, me having completed my tour and Matt proud of the accomplishment of reaching Tallinn from Eindhoven. Mind you, he's on his way to Nordkapp so I recommend you keep following his blog as well. 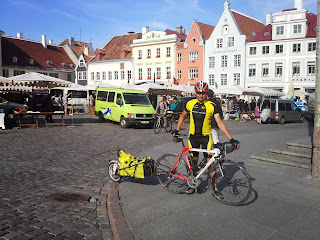 Seemingly unable to find a suitable café, we headed over to Matt's friend Ranno's place for a quick pit stop before I continued to the Russalka memorial where I waited a few short minutes for Nele, my Couchsurfing host, to show up.

Nice. Thanks for the great day into Tallinn. Looking forward to seeing you in Turku soon. I'll be hitting the road again today. :-)