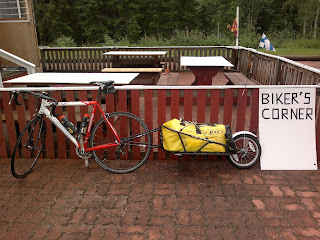 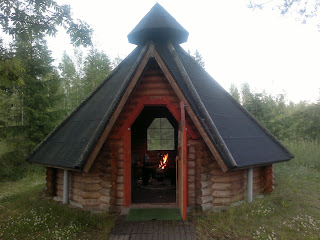 Ok, you'll get two bonus photos ;)
Posted by Thomas Soininen at 09:49 No comments: 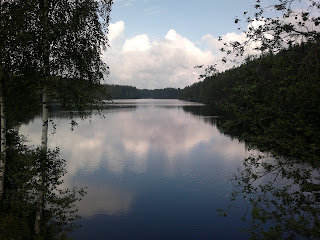 Quick update for my non-Finnish speaking followers. I'm in Suonenjoki this morning having stayed here last night and in Jyväskylä the night before. My need for rest and food has overridden my ability to keep two blogs and twitter feeds up to date. You'll get a bonus photo instead :)

Anyway, since you're dying to find out, here are the numbers from my two previous days on the bike: 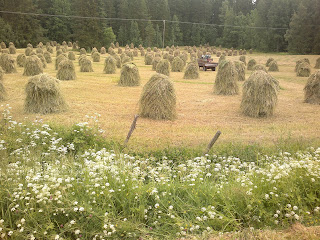 As you can see from the photo today's route was even more rural than yesterday's. Well that's not quite accurate, but I at least left route 9 so that I could actually admire the scenery. Oh, and avoid a fine for cycling on the motorway :)

From the area around Viiala I followed some excellent cycle paths to Valkeakoski where I stopped for lunch outside a supermarket. The road from Valkeakoski to Kangasala was really nice and the hills were few and far between. This changed for the last push from Kangasala to Orivesi during which I, for a brief moment, started contemplating the wisdom of this endeavour. Undulating is an understatement and my compact crankset doesn't have the range for comfortable climbing when tired.

Fortunately I had company for the last 10 km or so as a local roadie had caught up with me and stuck around to find out what I was up to. We parted ways as I turned towards the Säynäniemi campsite, yet to face a single drop of rain or the forecast lightning. As I came to a stop in front of the reception building the skies openend up and thunder crackled through the air.

I explained the purpose of my tour to the landlady and ended up being donated a stay in a small cottage. As I'm writing this the rain har started again and I'm happy not to be huddling in my tent. 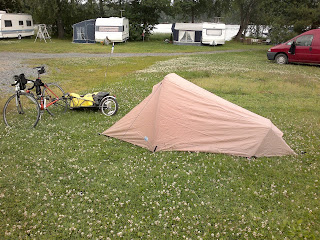 I had an uneventfulday on the bike interrupted by pleasant encounters almost everytime I stopped. The BOB Yak is as good a conversation starter as ever and I had to explain myself a few times. People's reactions tend to vary between being mildly impressed to "you're doing what?". Mentioning my heart condition and the charitable purpose of this tour equalizes most to "oh, that's nice".

Route 9 from Aura onwards is rather boring but fairly safe to ride. The shoulder is wide enough and there wasn't that much traffic today. Most drivers passed at a good three feet or more but there were of course a few that came closer as well.

Tonight I'm staying at Taikayö Camping, approximately 8 km west of Urjala. Tomorrow I'm getting back on route 9 for a bit then switching to smaller roads through Valkeakoski and Kangasala on my way to Orivesi. Here's to the forecast for heavy thunderstorms not being accurate..

Good Will on Wheels

This year I've already cycled far more than I did last summer. This blog has, however, remained dormant even though I've been clocking up the kilometers. Another thing that's different from last year is that I'm also counting the total distance I've cycled in miles in addition to kilometers. The reason for that is that I'm part of 1000 miles 2 work, raising money to pay for heart operations for kids in Vietnam with congenital heart defects (CHD). I was 'recruited' for this campaign by Val Monk who started it all about a year ago and has since just bout completed her 1000 miles. Read more about Val on her blog.

At the moment I'm up to about 652 miles (1050 km) but will soon be putting my participation on hold for a week as I'm about to set out on another charity project of my own. Starting on Saturday July 7th my aim is to cycle from Turku to Nurmes, a journey of about 620 km if the measurements on online maps are anything to go by. With mE I'll be dragging my trusted BOB Yak trailer and in it I will be hauling the usual cycle-tour gear: tent, sleeping bag, camping cooker, food, tools and clothes. I'll stay at campsites where available, use CouchSurfing or Warmshowers.org in the larger towns and the odd B&B. 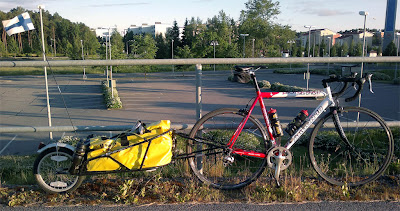 As in 2010 I'll be touring to raise awareness about CHD and to hopefully also inspire at least a few to donate to the Finnish Association for Heart Children and Adults. The association works to improve the lives of those who are living with congenital heart defects as well as their family members. In addition the association also supports research and education in matters related to CHD.

During the tour I'll be blogging mainly in Finnish in my tour specific blog with more frequent updates in English over on twitter. There might still be the odd blog post from the road here as well, but I'm not promising any daily digests as I've failed to deliver on that promise previously.

Here's a rough route plan for the Turku to Nurmes tour:

Yesterday I also took the trailer out for a spin as I went on a short ride to Raisio where the heart association organized an event called Good Will on Wheels. This event called for an all together different type of biker than I've usually written about on this blog as some 15 Harley Davidon riders gathered to take CHD kids for a short cruise. Unfortunately the weather was somewhat less than ideal with a cold, light drizzle keeping turnout at a minimum. Still, the kids who's parents didn't shy away from a little light rain seemed to enjoy the chance to ride on a large motorcycle. Posted by Thomas Soininen at 23:57 No comments: