The local youth of Kinksi continued their beer and BBQ party into the wee hours, but I still slept well and woke up fairy early. By then I was alone on the külaplats, making my morning routine faster than any previous day. This helped me get an early start and with the weather being cloudy, the cool, oxygen rich air meant I was soon trucking south towards Pärnu at a steady pace.

My only proper stop on my 60 km sprint to Pärnu came in Aruvälja where I enjoyed 2nd breakfast on a bench outside the village grocery store. 10 km later I had to unclip my shoes from the pedals again as roadworks brought traffic to a standstill for a while. 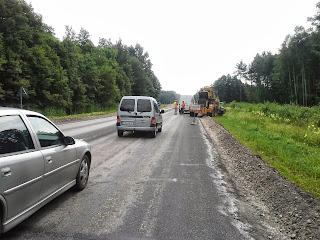 Once in Pärnu I stopped at the main library where I took the opportunity to give the battery of my phone a boost while waiting to hear from Matthew (@ArcticCycler, arctic-cycler.com). I had tweeted him the night before when I noticed he was also heading for Pärnu and would be there around the same time as me. During the hour I spent at the library I almost fell asleep on the chair I was sitting in. Sleeping less than 6h most nights of my tour was starting to take its toll on me.

With my phone battery having enough juice to last the rest of the day, I made my way in the general direction of the beach. I soon received a tweet from Matthew. He was going to Steffani pizza, together with Raimo, an Estonian roadie he'd cycled with since crossing the border from Latvia. Pizzas ordered, Matt and I soon started comparing notes and discussing the road ahead. It immediately became apparent that not only were we both heading to Tallinn, our schedules and planned routes were nearly identical.

Having made the obvious decision to share the road from Pärnu to Tallinn, Matt and I followed Raimo to Hawaii Express, a bike shop where we borrowed a track pump to get our tyres up to nominal pressure. Raimo then proceeded to guide us out of the city to where route 5, which would take us the first 35 km north, started.

For the final camping night of my tour, we endured the 6 km gravel road to Kaisma Suurjärve. After the külaplats in Kinksi, this was the place I had the least advance information about. I had chosen the place purely for its location (100 km south of Tallinn) and even chose to call to confirm there would be fresh water and showers before passing the last shop along the way. 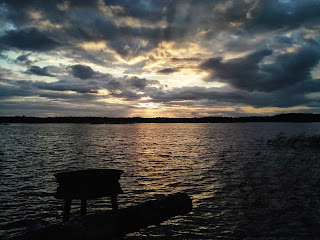 There was a shower as well as fresh water. The shower was adjacent a modern sauna with space for 10-15 people. There was also a well equipped kitchenette, a proper toilet as well as a large lounge complete with leather couches, a stereo and a 50" flat screen TV. The man who came around to hand us the key was also keen to tell us we'd be more than welcome to sleep inside the lodge should it happen to rain that night. The price for all this you ask? 5 euro, for both of us.