(Late update due to me falling asleep before I'd written everything I wanted to.)

Today was both a short and a long day. Short because my planned route for the day was only 20 km and long because I got up quite early and am only in my tent now, well past midnight.

I woke up a little before my 8.00 alarm after sleeping like a baby in the loft above the sauna at Tiit and Signe's summer house. After a while there were noises from the main building indicating that the others were awake as well. A delicious breakfast and a few travel anecdotes later I was moving again in time to reach the main road by 10.00.

This meant I had an hour to cover the remaining 18 km to Haapsalu if I wanted to see the victory day parade (Võidupüha paraad - video). The smooth road and the light tailwind made it even easier. As I reached the city centre a friendly policeman pointed me in the right direction towards the old train station. Once there I parked my bike and soon found a free spot along the barrier, just in time to see the President of Estonia, Toomas Ilves, arrive. 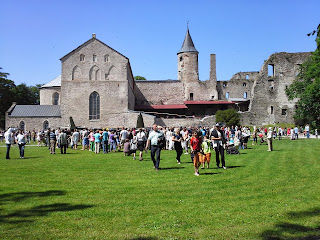 After the parade had left the grounds of the old train station, the crowd started to move as well. I followed suit on my bike, being careful not to run over any unsuspecting toes with my trailer. Soon I heard a Finnish man behind me asking if I was looking for a place to spend the night. When I replied that I was already planning to go to Camping Pikseke he was quick to inform me that he's actually the proprietor. As it turned out he originated from Turku but has lived in Estonia for 40 years. He also explained that the crowd was moving in the direction of the castle as the victory day celebrations would continue there. I entered the courtyard of the castle which was so nice I decided to sit down and have lunch. Having dealt with my hunger I went to the campsite to leave the trailer behind and also pitch my tent.

Not quite full after only having eaten what bread and cheese I had left from yesterday, my random cycling around Haapsalu and along the beautiful Promenaad soon led me to Restoran Jahta by the marina where I found some chicken pasta and a beer with my name on it. 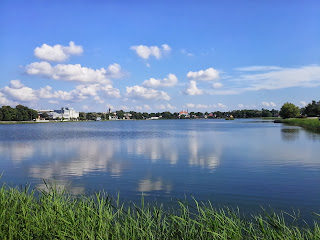 After spending another hour or so rolling around town taking in the sights I decided to pick up some breakfast material and head back to the campsite. I soon found myself in the company of three German cycle-tourers with whom I spent the rest of the evening throwing frisbee, playing badminton and discussing languages, cultures, history and politics.