I got up at a decent hour but somehow my morning routine took a bit longer than necessary, so I was only on the bike a little before 10. Knowing that the ferry from Muhu to the mainland runs every 30-35 minutes and that I'd only have well under 20 km to go once I'd crossed I decided to go for a two stop strategy.

This was also necessitated by the fact that the temperature was close to 25°C and rising already in the morning. Before leaving Kuressaare behind I stopped at the Auriga mall and found a sporting goods shop where I picked up a new pair of cycling gloves. Having also restocked my food supply, I soldiered on to Valjala where a lengthy food and drink stop was on order. 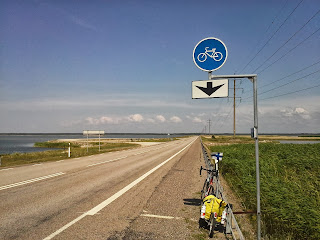 My second stop of the day was in Orissaare for which I had to make a little detour. I'm glad I did, as the sea breeze in the marina was the only respite from the scorching heat I had all day. Immediately after getting back to the main road towards Kuivastu I found myself on the Väikese väina tamm, the causeway joining the islands of Saaremaa and Muhumaa. Here I also enjoyed a bit of a cooling effect from the wind, but being from the side it also made cycling the narrow causeway a little tougher. Once across it was a further 14 km or so to the harbour in Kuivastu. While I truly enjoyed the flat landscape of the Estonian islands, making cycling very easy, it also robs you of an effortless roll down to the dock which you get on most islands in the Turku archipelago. 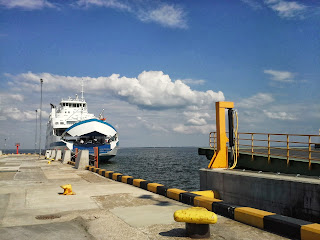 The ferries, there are two shuttling between Kuivastu and Virtsu, are quite new and proudly boast "Made in Saaremaa" on the bow and aft, visible as you drive off. The staff in the small café on board, though, were not allowed to fill up my bottles with drinking water. I instead stopped at a bar in Virtsu for an ice tea (not the Long Island variety, mind you) and also to find that the water I already had would be more than enough to last until I'd reach the campsite.

With less than 10 km to go I stopped to check for my turn to Voose from a roadside map. It was then that I discovered a potential campsite even closer to the crossroads where I would turn towards Pärnu in the morning. I quickly decided to head for the tiny village of Kinksi instead.

Less of a campsite and more of a village park or fairground, the Kinksi Külaplats initially seemed only moderately better than camping wild. My first impressions were, however, very deceiving as I was able to get electricity for my phone, fresh water (and a bag of homegrown cucumbers!) from the farm only 150 m up the road. The local boys were also at the külaplats, swimming in the pond, drinking beer and blaring music from their car. This was clearly the local pastime, so I decided to swap my lycras for my swimming trunks and joined in.