The early bird gets the worm and the lazy cycle tourist misses the ferry. I took my dear time to get ready in the morning and was only on the bike well after 9.30. With 9 km to the harbour in Rohuküla I figured I might just make it, but that it wouldn't matter if I didn't. As I got closer I started to think I actually would be in time after all. In the end I indeed was, just in time to see the 10.00 ferry round the pier.

The next ferry was scheduled for 11.30, so I bought my ticket and spent the next hour having coffee and charging my battery pack in the terminal. The ferry to Heltermaa took a little over an hour so it was close to 13 before I got truly started on my lap around most of Hiiumaa. 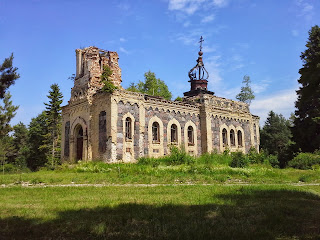 The surface of the road got really bad after only a couple of kilometres from the harbour. I tried to push on but elected to take a smoother detour to Hellamaa even though it would add some distance to my daily total. And man am I glad I did. I found the church ruins in the picture hidden behind some trees in a tiny village called Kuri. As soon as I'd taken the photo I was buzzed by a couple of NATO F-16s at MIL power barely over treetop level.

Detour over I returned to the main road which was a lot better as well from that point and almost all the way to Kärdla. There a perfectly smooth bike path started some 2 km before town and would continue for more than 10 km after. In Kärdla I treated myself to a long lunch stop followed by a visit to the grocery store to pick up some waffles and black currant juice. Back in 2007 I learnt from my touring partner that summer, Sergej, that this is an excellent method for coping with the heat while cycling. I diluted the juice to 2/3 with 1/3 water to avoid it being to sweet to gulp down.

I continued on my way and met a few groups of cyclists going the other direction. Once the bike path ended the road itself was decent, but had some sections which were downright terrible with the road bike. Also, although I was on an island and close to the shore I only saw the Baltic sea in a couple of places. Being surrounded by mostly forest, with any village being off route, I made good on my intention to arrive at my destination no later than 19.00. 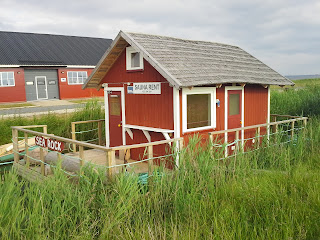 In fact, I was so far ahead of schedule that I could afford myself a final ice cream stop in Emmaste before continuing to the harbour of Sõru. Once there, I called the owner of the Sauna Raft Sea Rock who soon came down to let me in and fired up the stove. Feeling fresh after a few rounds in the sauna followed by dinner, I spotted a young couple also on bikes looking a bit lost. Having plenty of space in my floating home for the night, I asked if they needed a place to stay. Turned out they were also Finnish but were happy to sleep in their tent. They were, however, unable to say no to a go in the sauna. We talked for quite a while afterwards leading to me only going to sleep at 1 am.