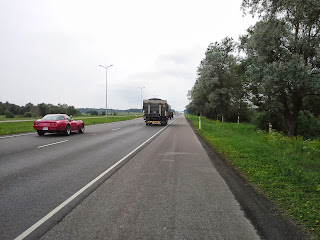 I call today day 1 as it was the first full day of riding. Then again, it wasn't even that as I got going only at 11. My discussions with my Couchsurfing host Anleena, involving politics, history and cultural stereotypes, went on for slightly longer than I had intended. It also rained a bit when I woke up, so I was in no hurry to leave.

When I eventually did, the sun had come out and the temperature was already around 25°C. It would get even hotter as the day wore on and the rain, forecast for the afternoon, apparently chose a different route. This also meant that I struggled somewhat with the pace and went through a lot of water.

I started by finding my way to route 4 heading south from Tallinn. After 21 km I took the exit for Haapsalu and, after a 30 minute lunch stop, started heading west on route 9. I stayed on the 9 for the next 50 km, with a second food stop in Risti. After Risti the by then narrow hard shoulder disappeared completely, but thankfully I only had a further 9 km to go to Palivere. Here I left the highways behind and continued on regional road no. 160. In Palivere I had a nice chat with a local truck driver who actually works in Naantali.

The 25 km along the 160 from Palivere to Oonga offered the only truly enjoyable cycling experience of the day. This road, despite its rough surface, was the highlight of my day on the bike. Beautiful, mostly empty countryside and virtually no traffic had me grinning and singing to myself. At times I even forgot about the slight headwind I had to overcome. 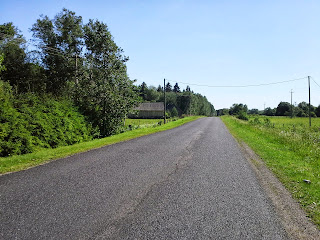 I arrived in Keravere an hour too early, but was met by the sister of one of my warmshowers hosts. Soon I came to realise that the summer house I'd been invited to was quite large and we'd be joined not only by Tiit and Signe but also Signe's parents, the previously mentioned sister as well as three youngsters and little Paula.

After a few rounds in the sauna it was time to eat. I had the privilege to join my extended host family for a lovely Midsummer dinner, complete with wine and vodka. Well fed, I've now turned in for the night in the loft above the sauna.